There are a lot of lines with good news in these readings, and I spent a lot of the week wondering what to do with them:

There’s all this really good stuff, good news that I hope you can hear and would be worth reflecting on. If it grabs you, go ahead and let it grab you and reflect away, absorb those things.

But at Beer and Bible, I was told I could preach on what grabbed me and moved me, so I’m going to take that advice and do that. For me, that’s the line in 1st Peter about Jesus, after he died and was made alive, making “proclamation to the imprisoned spirits.”

Proclamation to the imprisoned spirits…

With that line, my mind goes first to people who are actually in prison. It goes to Bruce Burnside, my mentor and friend and our former bishop, who is at Oregon Correctional Center now. A previous parishioner called this week to ask if I knew whether Bruce was safe. But it’s not just him; it’s Sheriff Mahoney trying to keep inmates in Dane County healthy, and it’s the outbreaks all over the country, where the virus ricochets ferociously in the confines of those walls with little social distancing except by keeping people in solitary confinement. The same for detention centers at our borders. Those people in prison need proclamation, need to be preached good news, need spiritual care to sustain their spirits and give hope.

My mind next goes far from that literal version of people in prison. The next place is into your home, into a notion of being confined in your house. Overall, you may be pretty content, and certainly not in the same shape as those in actual prison. But Christ does come to make proclamation to you there. That’s certainly true.

Of course in Wisconsin we’ve hit a rougher edge of this this week. There are some who claim they were forcibly kept at home, who protested against it, and fought to overturn the practice. There seems to be confusion for them that it was the government keeping them at home and not the coronavirus. They saw quarantine only as a bad thing and not a bad thing for a good end.

For them, then, there is a false sense of breaking free, encouraged by the President and the Tavern League. But that is false freedom, most especially from the real issue. Unfortunately, they are actually causing themselves and us to remain even more captive to the spread of the virus. Even as the claim is for reopening, they’ve functionally delayed all of our chances at having that happen. I understand it’s a bad idea, but this isn’t about condemning them or ridiculing or shaming them, since we’re all trapped in death. We’re not better off.

So another form of captivity that I know was pretty miserably imprisoning me this week was grief. It had me immobilized, in the current news and in looking ahead. I’ve felt maxed out, run down, and at the edge of tears. It magnifies and amplifies any of the other bad news, like the deaths we’re marking this week. It’s not just me; I saw our 7th graders morose and hardly able to talk, and have felt that desperation from others of you, too.

I know that it’s partly my personality, but it’s enough for me to deal with this day by day, and so those who are trying to plan ahead make me feel terribly down. The Wisconsin Council of Churches, for example, has a really solid document about what it will take to reopen churches; it’s even been cited in ELCA resources. But to me it is unbearable sadness in how far away it really is. I can’t begin conceiving and facing the distant idea that we might not be together for Christmas.

Some want to talk about it as the new normal, but I think the more definitive perspective is that it’s a new abnormal. Of course there are bright spots, and I’d invite you to take a moment to think of one of those from the week… I have plenty of those good thoughts, too. For the concern some of you will voice: I’m taking care of myself and you are, too, and it’s okay. It’s just there’s plenty that is not life as it should be.

Dorothea Torstenson shared a New York Times piece this week* that made comparisons to life after 9/11, including all of the screenings and metal detectors at airports that are part of our routine now (well, not now, but when it was possible to fly). I also hate that stuff. It traps us in fear, makes us feel that every plane we get on could become a weapon of death and destruction. It’s a restriction of life and is also an imprisonment. It wasn’t a new normal but a new abnormal.

So we’ll see how we come through the virus. And it’s still a long wait for us actually to see. But we know we’re not going to emerge for a shared MCC worship service on Pentecost as I first imagined. We’re not going to have cake for the intern starting in June. We’re not just going back to how things were.

Tom Stolzenburg pointed out that later on there will be things we miss about this time and which we’ll wish we could experience again, but Tom also notices he’s losing patience and that we have difficulty accepting the permanent change.

So I feel that’s a way that we’re quite imprisoned now. But our hope, then, isn’t in getting back to normal. We need Christ to come and make proclamation to us. 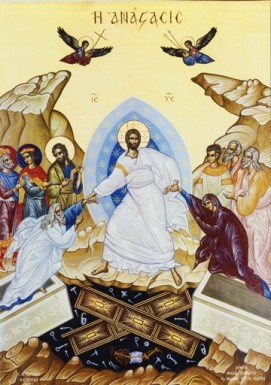 With that, the fullest sense of this verse grabs me. Christ going to make proclamation to the spirits in prison is one of the places that gave rise to the line in the Apostles’ Creed that Jesus descended to the dead, or into hell in the previous language. This belief is known as the “harrowing of Hades” (a good name!), and it is celebrated on the Saturday before Easter, that Jesus didn’t just spend that day hanging out dead in the tomb behind the unrolled stone. He was busy going to make proclamation to the spirits in prison, to the dead, to tell them the good news, that they were freed from death. Maybe he was giving a heads up: Hey, you’ll want to pay attention tomorrow at dawn, because on Easter, we’re all going to start saying “Alleluia! I am risen!”

The icon is a representation of this harrowing of Hades, that the chains of death have been broken, the strong doors that closed and confined in the dead have been knocked down, and Jesus reaches into the grave to pull others out.

What I cherish so much about this, in the face of death, and in these difficult days, is that no place is beyond the reach of Jesus, nobody is left out from the proclamation of his voice that sets us free. 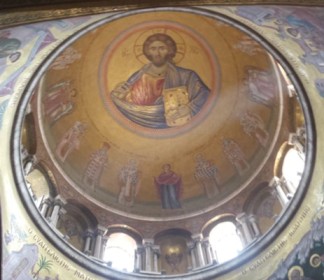 The other image, from the dome in the Church of the Holy Sepulchre over the temporary tomb of Jesus, is of Christ as the ruler of all, that all things have to submit to him. It means he gets his way, and his way is love and life. No prison bars, no bad news, no rotten choices, no bygone reality and no new abnormal reality, no virus, no sadness or grief, not even death itself can stand against him. They are all brought on board to his way of love and life. After all, as the readings said, he is the creator and sustainer of all, giving you everything, with never-failing love, with you forever, and because he lives, you will live. That is the proclamation you have the benefit of hearing right now, as it begins to set your spirits free.